Greetings travelers! New Dungeonlike will come with some new armor and weapons, which are (mostly) faction-oriented. This means that they will be only found on enemies from a specific faction and can be only bought from shops of that faction.

Trollhide armor pieces (Gloves, Boots, Vest). As the name suggest, these are leather armor pieces made out of troll's hide. They are very light and come with little armor penalty, yet they offer quite formiddable physical protection. Unfortunately, trolls are very... flammable. This means that as long as you are fighting warriors, this armor set will be amazing, but a bunch of pyromancers might change your opinion quite quickly. This set is favored by the Horde Deserters.

Royal armor pieces (Mail and Helmet). These are designed to be  the pride of Alarian armorsmiths, as they offer improved protection over comparable standard items (Chain Mail and Closed Helmet), but with lower armor penalty. Their drawback is that endgame heavy armor (Breastplate and Bascinet) will still offer vastly better protection, but if you can't stand the massive armor penalty and can't be bothered to ivnest in Armor skill, you might as well go Royal.

Then there are three weapons:
1. Morningstar is an Alarian one handed hammer type weapon which provides a bit of armor piercing, and will be sometimes found used by the bandits. Considering that blunt weapons have an easier time against armor in general, this might seem quite brutal to use, but the weapon is slow and has a higher base stamina cost than other one handed hammers.

2. Orcish Axe is... well, a massive axe, who would have thought? It's a huge, heavy two handed axe which offers slightly higher damage than ordinary Great Axe, but also needs more stamina. Getting a powerful orc swing that thing at you might be quite a traumatic experience!

3. The final item, currently not assigned to any enemies (only buyable from shops) is the Estoc. To keep it short, I wil only say that it's a two handed sword which has one main goal: to be the ultimate armor piercer in the game. Now, if you take a look at the screenshot below, you might have doubts about this, as it would seem that both Estoc and Orcish Axe offer 10% armor penetration, so where is the difference? Short answer: critical hits and stabbing attacks work slightly differently now, but sometimes "slightly" is enough to make a huge difference.

I will go deeper into the subject of armor, armor piercing and critical hit changes in a separate post tomorrow, as that is the area which received majority of my attention this time around and might result in quite a bulky post. 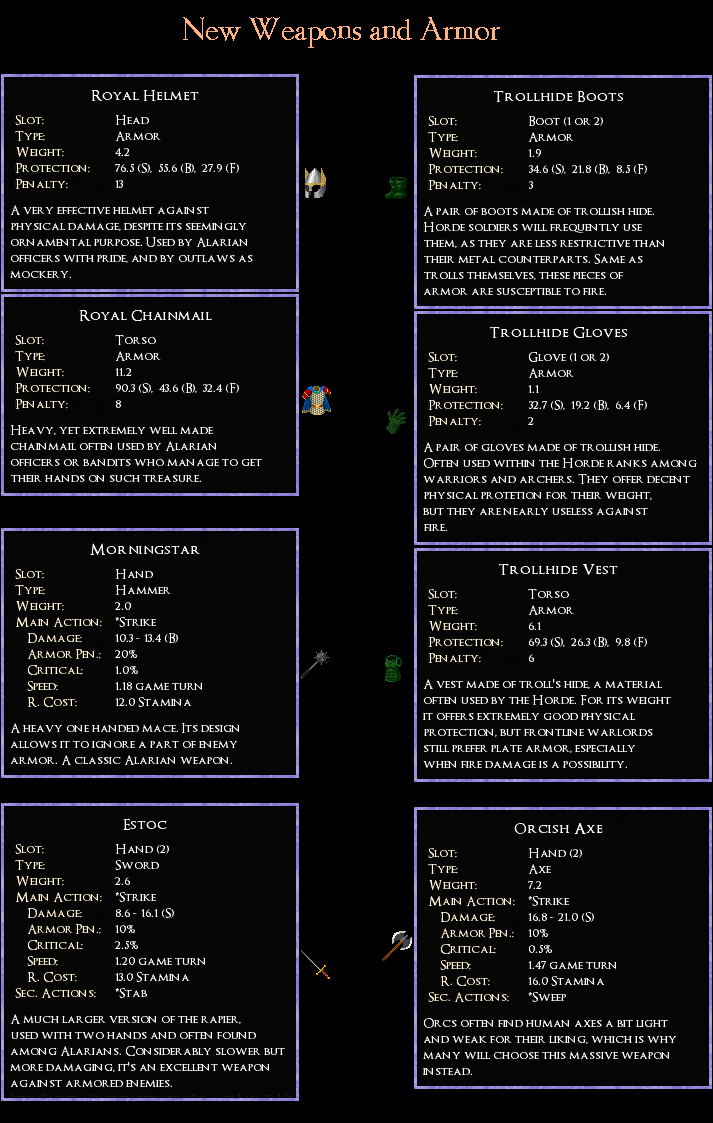